The DCRI’s Robert Mentz, MD, is the co-principal investigator for a pragmatic clinical trial on heart failure called TRANSFORM-HF, which is funded by the National Heart, Lung, and Blood Institute (NHLBI). Mentz discussed features of the trial with Patrice Desvigne-Nickens, MD, a medical officer in the Heart Failure and Arrhythmias Branch of the NHLBI and project officer for TRANSFORM-HF.

ROB: Patrice, we met while working with the Heart Failure Research Network funded by the NHLBI, which was formed to run many small trials to answer key questions in heart failure. Many of the lessons learned from the network helped us fine-tune our approach to TRANSFORM-HF. TRANSFORM is a real-world comparative effectiveness study that has many elements of pragmatism, including a broader population, streamlined trial conduct, and fewer requirements for patients in the follow-up period.

PATRICE: Yes, TRANSFORM looks at two active drugs to determine if one is more effective than the other in improving outcomes in a general population of patients with heart failure. Because it’s answering an important question using available drugs and tools, a pragmatic design is possible and preferred. Determining the kind of trial needed often depends on context, whether it’s a proof-of-concept trial or whether it’s a definitive trial seeking clinical outcomes that could change practice. Pragmatic trials are not new, although new emphasis may be placed on pursuing more pragmatic methods. In fact, the NHLBI has supported trials in the past that have involved a large number of patients with heart failure, clinically important outcomes, and minimal case report forms—all features of a pragmatic trial.

ROB: Agreed. As both the DCRI and the NHLBI look toward the future of clinical research, TRANSFORM is a good step forward in an environment in which it’s become harder to recruit patients with heart failure. We’re learning how to do trials more efficiently and make the experience better for all stakeholders, although of course there is more work to be done to innovate direct-to-patient trials. Can you talk a bit about differences you’ve seen in TRANSFORM versus other heart failure trials you’ve worked on in your career? 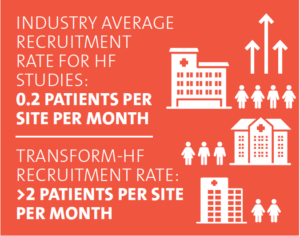 PATRICE: One of the fundamental differences in running a pragmatic trial is that it requires broader eligibility criteria, which hopefully allows all patients with the condition to be included. Traditionally we must interview many patients before finding one who is eligible. A pragmatic trial like TRANSFORM is a tremendously different paradigm where we’re eager to enroll everyone affected by the disease we’re studying.

ROB: We’ve seen this difference impact TRANSFORM’s enrollment rates. Overall in the U.S., heart failure studies recruit about 0.2 patients per site per month. Our goal was to get that to three to five patients. Our average right now is just over two patients per site per month, which is higher than average but still not yet where we need it to be. Broadening the eligibility criteria has also resulted in the important inclusion of women and minorities. Patrice, can you comment on what you see as the future for pragmatic trials and our work together?

PATRICE: As we improve patient outcomes and they live longer, they have other health issues that need more study, which leads to additional research questions. To address this paradox with limited resources, we’ll need to conduct trials with large numbers of patients, which is where pragmatic design is a good option. At the DCRI, which is a research tour de force in cardiology clinical trials, and at the NHLBI, we’re working toward bringing clinical research into the 21st century by embracing information technology to facilitate collection and analyses of traditional patient-reported outcomes and, when appropriate, administrative databases, which will enhance efficiency and lower costs. Because we share these goals, it makes sense to align forces to work on projects like TRANSFORM-HF.