March 18, 2017 – A new study is a first step in potentially expanding post-ACS treatment.

Substituting rivaroxaban for aspirin in patients with acute coronary syndromes (ACS) appears to cause no significant increase in bleeding risk, according to a study led by scientists from the DCRI and Harvard Medical School. 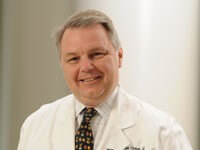 The findings of the Phase 2 GEMINI ACS 1 study — presented Saturday at the American College of Cardiology 66th Annual Scientific Session in Washington, D.C., and simultaneously published in the journal The Lancet — are based on a randomized study of 3,037 patients with ACS.

Acute coronary syndrome is characterized by reduced blood flow to the heart, including heart attack or unstable angina. Standard treatment includes a regimen of aspirin and antiplatelet drugs such as ticagrelor or clopidogrel. Some patients, however, cannot tolerate aspirin, and for others, the dual therapy doesn’t prevent complications.

“We wanted to examine if we could substitute a blood thinner for aspirin in the standard regimen and achieve better or similar outcomes. If so, it could open up new treatment avenues,” said E. Magnus Ohman, the study’s co-lead author and member of the DCRI (pictured). Ohman and Michael Gibson, MD, of Harvard Medical School, led the study.

Study patients were randomly assigned to take either rivaroxaban or aspirin in addition to an antiplatelet drug within 10 days of presenting with ACS. The therapy was continued for six to 12 months.

Researchers sought to determine whether rivaroxaban caused more bleeding than aspirin as a component of the dual therapy. They found no statistically significant difference in bleeding rates among the rivaroxaban group (5.3 percent) and the aspirin group (4.9 percent).

“This study is important because it is the first where aspirin has been removed within the first few days after patients experienced ACS and replaced with another anti-clotting drug,” Ohman said. “Finding that bleeding profiles were the same in both study groups is an exciting first step towards expanding post-ACS treatment.”

Ohman noted that the trial was exploratory and further studies are needed to evaluate how the regimens compare in preventing stroke, heart attack and death.