March 17, 2019 – Patients with negative FFR-CT scans had a low, one-year risk of a heart attack or death.

One-year follow-up results show that a newer, non-invasive technology to evaluate heart pain provided a reliable way to identify which patients had dangerous artery blockages, according to a study co-led by the DCRI. 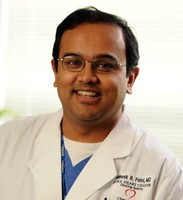 “Our study shows that in clinical practice, when new technology provides a negative result regarding the chance for a physiologically significant stenosis, the patient and physician should be reassured that the chances of major adverse cardiac events are low,” said lead author Manesh Patel, MD, chief of the Division of Cardiology at Duke University School of Medicine.

Specifically, the researchers found that among those with an FFR-CT reading above 0.80, suggesting blood flow is not dangerously restricted, the cardiovascular death and heart attack risks were significantly lower, and revascularization was significantly lower (5.8 percent vs. 38.4 percent) and was unlikely after 90 days.

“This research, with one-year follow-up, suggests that an FFR-CT test can be trusted when used as it was in this real-world observational registry,” Patel said. “And while we don’t have perfect warranties in medicine, a negative FFR-CT result was seen to have low risk for a major heart event in the following year.”