March 28, 2020 – The DCRI’s Manesh Patel, MD, who was a member of the steering committee for this late-breaking clinical trial, has been working for years to determine the best treatment strategies for patients with peripheral artery disease.

Findings presented as a late-breaking clinical trial at the 2020 American College of Cardiology (ACC) and World Congress of Cardiology Scientific Sessions and published simultaneously in the New England Journal of Medicine from the VOYAGER PAD trial reveal a promising treatment strategy for patients with peripheral artery disease undergoing revascularization.

“This is a significant finding for patients with peripheral artery disease because for the first time, we have a clear therapy that will reduce risk of amputation for those who undergo revascularization,” said the DCRI’s Manesh Patel, MD, who was on the steering committee for VOYAGER PAD.

The study, which was led by CPC Clinical Research of the University of Colorado Anschutz Medical Campus, randomized 6,500 patients with peripheral artery disease to either rivaroxaban combined with aspirin or placebo combined with aspirin. Some of the patients were also taking clopidogrel, as current standard of care for these patients combines aspirin with clopidogrel. All participants in the study had recently undergone revascularization—two-thirds through an endovascular balloon stent and one-third through surgery.

The group treated with rivaroxaban, an antithrombotic agent, experienced a significant reduction in both major adverse cardiovascular events and in limb events like critical limb ischemia and amputation.

“These findings add important knowledge to an area in which I’ve had personal interest for years, as a physician who cares for these patients and performs revascularization procedures,” Patel said. “I’m honored to have served on the steering committee, as this has also been an area in which the DCRI has been building knowledge for years.”

AN EVOLVING VIEW OF PAD: EUCLID

The scientific community’s view of peripheral artery disease began to pivot with the release of findings from EUCLID, a pivotal trial led by the DCRI.

EUCLID, which is the largest study to date on peripheral artery disease, enrolled 14,000 patients and compared two anti-platelet agents, clopidogrel and ticagrelor. Although ticagrelor was, at the time, a new and promising therapy, the study found no significant difference in cardiovascular or limb events between the two groups. The results were presented at the 2016 American Heart Association Scientific Sessions and published in the New England Journal of Medicine. 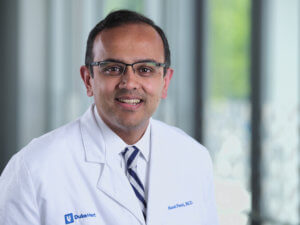 “Up until that point, we had thought that more antiplatelet therapy was the best way to treat all atherosclerosis, whether patients had coronary artery disease (blockages in the arteries of the heart) or peripheral artery disease (blockages in the arteries of the legs,” Patel said. “EUCLID proved that was not true for patients with peripheral artery disease and let us know that we’d have to think differently when treating these patients. Four years later, VOYAGER PAD has provided an answer by showing us that antiplatelet therapy combined with antithrombotic therapy may be the most beneficial strategy for these patients.”

Now that Patel has contributed to finding the best treatment strategy for patients with peripheral artery disease, he’s turning to demonstrating the effectiveness of these treatments in the real world.

With his DCRI colleague Sreekanth Vemulapalli, MD, he will be co-leading an NIH-funded registry called BEST-CLI. The registry, which is the companion to a non-DCRI clinical trial, will enroll 1,200 patients with critical limb ischemia across 40 to 50 sites in the U.S. and will follow them as they receive medical therapy, surgery, or endovascular therapy.

“Our goal is to better understand the outcomes across a broad population of critical limb ischemia patient, and determine how often proven medical therapies are being used in the real world, and whether they have the same positive effect in clinical care that we’ve seen in clinical trials,” Patel said. “Our work with our colleagues around the world through the DCRI has played a role in changing the arc of how atherosclerosis is thought about and treated.”