June 23, 2019 – The study’s design, which researchers hope to use for other conditions, enabled testing of multiple diagnostic assays simultaneously and resulted in cost savings.

Molecular diagnostic assays have transformed the field of infectious diseases, allowing for swift and sensitive detection of organisms previously challenging to diagnose, but it can be difficult to study how these new tests perform. Members of the Antibacterial Resistance Leadership Group (ARLG), which is facilitated by the DCRI, recently conducted a study of several assays used to detect extragenital gonorrhea and Chlamydia trachomatis. They say their latest research will help to quell the transmission of these infections and could change the landscape for how diagnostic tests are studied.

Prior to this study, there were no diagnostic tests approved by the U.S. Food and Drug Administration (FDA) for determining the presence of extragenital gonorrhea, despite recommendations from the U.S. Centers for Disease Control and Prevention for screening in certain populations, said the DCRI’s Vance Fowler, MD, MHS, (pictured), co-principal investigator for the ARLG.  As a result, few laboratories offered testing and clinicians lacked an FDA cleared diagnostic test. Lack of testing can result in the continued spread of the bacteria that causes gonorrhea, including drug-resistant strains. 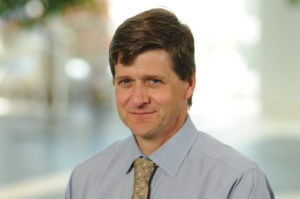 Accurate diagnostics that are more readily available will result in better detection and timely treatment, which could help to slow the rise of antibiotic resistance, Fowler said.

“Diagnosis is a major problem in antibacterial resistance, and gonorrhea has been identified by the U.S. Centers for Disease Control and the World Health Organization as a concerning bacterium with rapidly emerging resistance,” he said.

ARLG investigators collaborated with the National Institute of Allergy and Infectious Diseases (NIAID), the FDA, Cepheid, and Hologic on this unique study design that incorporated simultaneous testing of samples from a single patient’s pharynx and rectum on multiple diagnostic platforms. Results from this simultaneous testing were incorporated into a reference, or “gold,” standard that could then be used to assess whether each of the diagnostic platforms correctly diagnosed extragenital gonorrhea and chlamydia.

After establishing the reference standard, the study team conducted a clinical trial that enrolled more than 2,500 patients. The study tested a new design that allowed evaluation of multiple diagnostics from different companies simultaneously.

“This idea came from the work I do in my investigative lab, where we often reuse the same clinical samples to answer multiple questions,” Fowler said. “I began to realize that the same idea could be applied to evaluating new diagnostics — if we could test multiple diagnostics on the same patient enrolled into a single trial, we could potentially reduce costs associated with enrolling multiple patient cohorts. This is about enhancing pragmatism in the diagnostic space.”

In 2014, Fowler presented the concept of “one patient, more than one diagnostic” at a meeting sponsored by the National Institutes of Health.  Evaluating diagnostics for extragenital gonorrhea was a way to test this strategy. Fowler relied on the sexually transmitted infection expertise of his ARLG colleague and primary investigator of the project, Jeffrey Klausner, MD, MPH, from the University of California-Los Angeles. On May 23, 2019, two of the devices evaluated in this study received FDA clearance for use to detect pharyngeal and rectal gonorrhea and C. trachomatis, the first two devices approved for this indication.

Fowler sees wide applications for the design and believes the same technique of testing multiple diagnostics simultaneously could be used in many other conditions, such as urinary tract infections, bloodstream infections, and pneumonia.

This process could also benefit companies developing diagnostics in several ways.  First, the cost of enrolling patients into a Master diagnostic trial would be only a fraction of the conventional approach. Next, each company would ultimately receive the trial data relevant to their platform along with the reference standard for submission to the FDA for clearance of their diagnostic platform.

“Employing a platform such as this could enhance and facilitate the ability to develop and ultimately commercialize new diagnostic platforms, providing clinicians with more informed decision making in managing patients with infections caused by multidrug resistant bacteria,” Fowler said.

The ARLG develops, designs, implements, and manages a clinical research agenda to increase knowledge of antibacterial resistance. It aims to advance research by building transformational trials that will change clinical practice and reduce the impact of antibacterial resistance. The ARLG is facilitated by the DCRI and works under the centralized leadership of an executive committee and two principal investigators: Fowler and Henry ‘Chip’ Chambers, MD, of the University of California, San Francisco.

Other authors that collaborated on this study include Sarah Doernberg, MD,MAS, of the University of California-San Francisco.