May 17, 2017 – DCRI founder Robert Califf, MD, will continue to serve as a senior advisor for the DCRI.

Robert Califf, MD, the former Commissioner of the U.S. Food and Drug Administration, an internationally renowned clinical trial expert, and a longtime Duke faculty leader will assume the position of Vice Chancellor for Health Data Science for Duke Health. Califf’s appointment was announced today by A. Eugene Washington, MD, Duke Chancellor for Health Affairs and President and CEO of the Duke University Health System. 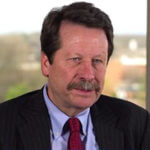 “Dr. Califf is one of the most respected figures in academic medicine today and is widely regarded as a preeminent innovator in clinical evidence generation,” Washington said. “One of the primary themes that has defined his career has been his pursuit of translating clinical information into pragmatic approaches to improving healthcare and health. It is this lifelong quest that uniquely qualifies him to lead these vitally important health data science endeavors for Duke.”

Califf also becomes the director of a new cross-campus center at Duke University for integrated health data science. This center, which has not yet been formally named, will seek to advance and create inter-campus collaborations focused on health data science-driven research and innovation, amplify Duke’s role in building a nationally regarded network for clinical evidence generation, and develop a stronger presence and role for Duke in Silicon Valley and other areas known for data science innovation and excellence. Both of Califf’s appointments will be effective immediately.

In addition to these new roles at Duke, Califf will be joining the senior management team at Verily Life Sciences, an Alphabet company. He will split his time evenly between his responsibilities at Duke and at Verily.

“We’re honored that Dr. Califf has chosen this innovative career option from among the many significant and high level opportunities that were available to him following his exceptional service as FDA Commissioner,” said Mary Klotman, MD, chair of the Department of Medicine and dean-elect of Duke University School of Medicine. “Better understanding the most effective, pragmatic application of the mountains of data that continue to grow is one of the great opportunities in clinical medicine in the coming years.”

During his career at Duke, Califf has held many significant roles including serving vice chancellor of clinical and translational research, and the director of the Duke Translational Medicine Institute. Califf might be best known as a founding director of the DCRI, now the largest and one of the most respected academic clinical research organizations globally. Califf will continue to serve as a senior advisor at the DCRI.

Outside of Duke, Califf has led many landmark clinical studies, and is a nationally and internationally recognized expert in cardiovascular medicine, health outcomes research, health care quality, and clinical research. Califf also played a pivotal role in the development and leadership of the national Patient-Centered Outcomes Research Network, which is designed to enhance the quality and relevance of clinical evidence that is used to guide health decisions.

Califf was a member of the Institute of Medicine (IOM) committees that recommended Medicare coverage of clinical trials and the removal of the dietary supplement ephedra from the market, and of the IOM’s Committee on Identifying and Preventing Medication Errors.

Califf is one of the top 10 most-cited medical authors with more than 1,200 peer reviewed publications.

Califf earned both his undergraduate and M.D. degrees from Duke in 1973 and 1978 respectively, and left North Carolina only briefly when he completed an internal medicine residency at the University of San Francisco. Except for his two years at FDA, he has spent his entire career at Duke.

“We are most fortunate that Rob will invest his considerable expertise and energy to build a university-wide center that coalesces data science expertise and health data resources from across the campus for the improvement of human health,” said Sally Kornbluth, PhD, Duke University Provost. “I believe his commitment to this vision has the potential to create a unique engine for better understanding human health and disease.”

In his new role with Verily Life Sciences, Califf will serve to provide guidance for translation of Verily’s growing volume of health-related data into practical health applications.

“We were all very proud of Rob during his service to the country at the FDA,” said Washington. “But we are even more proud today that he is coming home to Duke to help us continue to create the future of healthcare and health.”