April 21, 2015 – The DCRI’s Uptal Patel, MD, and other researchers analyzed how rapid urbanization and demographic changes are driving the spread of non-communicable diseases such as CKD in low- and middle-income nations.

Citizens of Northern Tanzania are at increased risk of contracting chronic kidney disease (CKD), and have greater mortality and morbidity, according to the first randomly sampled, community-based household-level survey of CKD in East Africa.The study, conducted by the DCRI’s Uptal Patel, MD (pictured), and other researchers at Duke and Kilimanjaro Christian Medical College in Tanzania, appears this month in the online journal PLoS One. 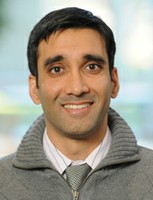 Non-communicable diseases such as CKD disproportionately affect low- and middle-income nations, particularly those of sub-Saharan Africa. These diseases are often driven by urbanization. Tanzania has undergone a particularly rapid period of urbanization and demographic change, with the country’s urban population increasing to nearly 30 percent today from less than 5 percent in 1970. Despite the heavy burden that CKD and other non-communicable diseases have inflicted on East Africa, until now there have been no community-based epidemiological studies of CKD in the region.

In this study, the researchers used data from the Comprehensive Kidney Disease Assessment for Risk Factors, Epidemiology, Knowledge, and Attitudes (CKD-AFRIKA) to obtain a better picture of how CKD is affecting Northern Tanzania. Between January and June 2014, the CKD-AFRIKA researchers conducted a household survey of randomly selected adults in Northern Tanzania. Trained surveyors and field researchers administered surveys and CKD tests to 481 adults from 346 households. In addition to basic demographic information, participants were asked about any history of diabetes, hypertension, HIV, kidney disease, or heart disease. Surveyors also collected information about any medications the participants were taking. CKD testing was conducted by obtaining biospecimens from the participants.

The entire survey population included 123 men (25.6 percent) and 358 women (74.4 percent) with a median age of 45 years. The majority of the participants (288; 59.9 percent) belonged to the Chagga ethnic group. Most of them (370, 77 percent) lived in urban areas and worked as either farmers or daily wage-earners (199; 41.4 percent). The proportion of participants with some secondary or post-secondary education (22.4 percent) was somewhat higher than the national average (14.6 percent).

The overall prevalence of CKD was 7.0 percent, with 15.2 percent prevalence in urban areas and 2.0 percent prevalence in rural areas. Approximately half of those with CKD were not associated with any of the measured risk factors of hypertension, diabetes, or HIV. Despite the high burden of CKD among urban residents, awareness of CKD was low overall. Relatively few CKD patients received any medications for comorbidities that could slow the progression of the disease.

These findings, the researchers concluded, demonstrate the considerable burden that CKD has placed on the public health system in Northern Tanzania. As the region continues to undergo rapid urbanization, further research is needed to determine how this will impact public health.