May 2, 2019 – The program, offered by the American College of Cardiology, will see involvement from DCRI faculty in chairing, teaching, and participating. 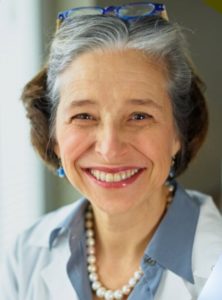 The Clinical Trials Research Program is a training and networking program open to women cardiologists who have committed to a career in clinical research and have been nominated by their institution for further development in research leadership. The program, which will be held in May in Washington, D.C., is co-led by Pamela Douglas, MD, and Tracy Wang, MD, MHS, MSc, at the DCRI, as well as Mary Norine Walsh, MD, at St Vincent’s. Douglas brought the idea for a women-specific professional development program to the American College of Cardiology’s Diversity and Inclusion initiative, which she also chairs.

“Half of all medical students are women, and roughly 45 percent of internal medicine residents are women, but only 20 to 25 percent of cardiology fellows are women,” said Douglas (pictured left), who has served as director of the DCRI’s imaging program since 2006. “So among practicing cardiologists, it’s only about 10 to 12 percent women. This means we’re missing a huge amount of talent—we’re missing about 30 percent of the brainpower in our profession.”

Over the years, Douglas and Wang have had ongoing discussions about how to best provide career opportunities for women. It is an issue that is personal for Wang, who wanted to be an interventional cardiologist but ultimately ended up choosing a different path. Although this decision was influenced by many factors, she attributes it in part to the fact that there were few female interventional researcher mentors at Duke and elsewhere during her training.

Wang and Douglas hope to help solve the representation problem with women-specific offerings like the ACC Clinical Trials Research Program.

“We want to help women navigate some of the same challenges we saw when we were early-career faculty,” Wang said. “We want this program to act as a launching pad to help these promising researchers get to where they need to be — at the highest levels of research leadership.”

Wang (pictured right) said the program will do this in three ways: by building a solid foundation of knowledge, by creating peer networks that help women sponsor each other for opportunities and leadership roles, and by connecting women with study funders/leaders, role models and other resources.

Wang and Douglas hope there will be future iterations of the program. Approximately 50 women were accepted to this inaugural cohort, which is 10 percent underrepresented minorities and 15 percent international researchers.

The program’s primary goal is to elevate women’s careers, but promoting women will also have a positive impact on science and on patients, Douglas and Wang said. This is because women are

Daubert, who has been at the DCRI since 2012, said she applied to the program because the agenda offered each participant the opportunity to create her own personal career action plan. She is looking forward to forecasting new opportunities and collaborations as her clinical research career continues to grow.

“It’s important to train women in a male-dominated field like cardiology so that we can take a balanced approach to care and ensure that gender disparities are adequately addressed,” she said.

Melloni, who has been at the DCRI since she arrived for a fellowship in 2005, said she is most excited about enhancing her skills in certain areas, such as engaging with stakeholders and forging relationships with sponsors. Although she has worked on many different trials, she said she has more to learn.

Both Daubert and Melloni also said they will find value in making connections with other female cardiologists and helping to create a network for professional advancement.

“I like clinical research because each trial is different and presents different challenges,” Melloni said. “But the road to becoming an expert is long.”

The DCRI’s Kevin Thomas, MD, and Kevin Anstrom, PhD, will also serve as faculty for the program.