January 2, 2020 – The HARMONEE trial is part of the Harmonization by Doing program, which aims to create a uniform pathway for clinical development in the U.S. and Japan.

A DCRI-led trial that was the first to use a common protocol to study a device in patients in both the U.S. and Japan recently led to approval for a coronary device in Japan. 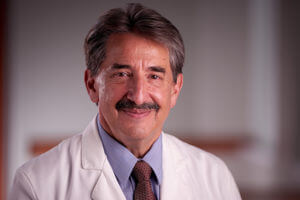 HARMONEE enrolled 572 patients with ischemic coronary disease and non-ST-elevation acute coronary disease across 50 sites in the U.S. and Japan to test the efficacy of a novel combo stent developed by OrbusNeich Medical. The DCRI’s Mitchell Krucoff, MD, (pictured left), was the international co-primary investigator, along with Shigeru Saito, MD, from Kamakura, Japan. The DCRI’s David Kong, MD, (pictured right), served as the primary investigator leading the operations team.

Because stents work by inserting a metal scaffold into the blood vessel to help open it, these devices can present a risk of blood vessel tears. The tears heal by developing scar tissue, which may result in blocked blood vessels—the same condition the stent was meant to treat.

To address this problem, producers of stents began to use chemotherapy agents to prevent scar tissue from growing. However, the drugs also prevented healing, which increased risk of blood clots leading to stent thrombosis. 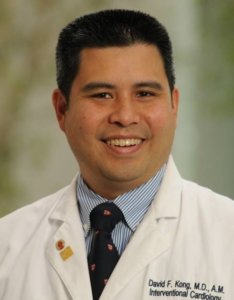 The combo stent tested in the HARMONEE trial seeks to prevent stent thrombosis by including an antibody that attracts progenitor cells in an effort to combat the negative effects of the chemotherapy drug, sirolimus.

The trial, which randomized patients to either a typical stainless steel stent, or the combo stent, completed dual regulatory objectives. In the U.S., it functioned as a feasibility study, while in Japan, it led to Shonin regulatory approval—the equivalent of pre-market authorization in the U.S.

Primary results from HARMONEE were presented as a late-breaking clinical trial at TCT 2017 and were published in American Heart Journal.

HARMONEE is a part of the “Harmonization by Doing” program, which is a collaborative effort between U.S. and Japanese academics, medical device industry collaborators, and the U.S Food and Drug Administration (FDA) and the equivalent regulatory body in Japan, the Pharmaceuticals and Medical Devices Agency (PMDA). The goal of the program, which has been running for over 15 years, is to create a uniform pathway for clinical development in the U.S. and Japan. DCRI founders and leaders of the program are Krucoff and John Alexander, MD, MHS (pictured bottom).

Working with Japan on device approvals is a great opportunity because it is such a large and important health care market, Alexander said. Additionally, both countries have learned from each other throughout the process. 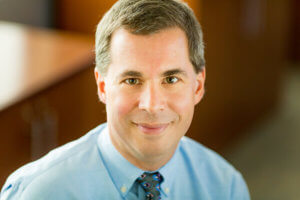 A trial like HARMONEE takes coordination from many groups within the DCRI, including regulatory experts, statisticians, and operations staff. It also requires external collaboration with a Japanese contract research organization and Japanese regulators. The DCRI’s Clinical Events Classification (CEC) group also played a major role in this study, building a robust system for electronic data capture of clinical events. The group also built a quality control process, blindly resending events back through additional adjudicators and comparing the results to ensure consistency in the adjudication process. Lauren Arney served as the CEC project lead for the study, and Alicia Lowe served as the CEC coordinator. The DCRI’s Rajendra Mehta, MD, oversaw the work as the CEC principal investigator. Additional DCRI contributors to this project include Diane Joseph, the project leader; and Hussein Al-Khalidi, PhD, and Jyotsna Garg, MS, who served as senior statisticians.

“The DCRI’s ongoing partnership with clinical investigators in Japan is a good representation of the DCRI’s mission to conduct innovative clinical research and share knowledge that improves the care of patients around the world,” Alexander said. “Our faculty and operational staff collaborate with colleagues from many countries around the world.”