October 18, 2018 – The network’s latest award allows more study on the impact of genetics, specific drugs, and supplements on liver injury.

Drug-induced liver injury (DILI) affects thousands of patients every year, and is the most common reason for both medication withdrawal and U.S. Food and Drug Administration (FDA) regulatory actions concerning drugs. Up to 9 percent of all adverse drug reactions reported to health authorities come from DILI, and several hundred medications and herbal and dietary supplements have been implicated.

Established in 2003 by The National Institute of Diabetes and Digestive and Kidney Diseases (NIDDK), the Drug-Induced Liver Injury Network (DILIN) collects and analyzes cases of liver injury to help better understand their source. DILIN consists of one data coordinating center (DCC) and several clinical centers across the country. 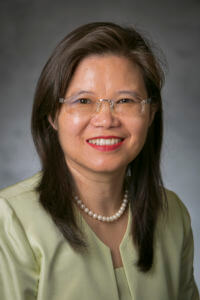 From the start, the DCRI has served as the DCC for DILIN. With its NIDDK award renewed every five years since inception, DILIN’s DCC is the longest-running in DCRI history. In that time, according to the DCRI’s Huiman Barnhart, PhD (pictured), the program has significantly grown and evolved.

“Our research focus over the years has shifted to genetics, specific drugs, and supplements,” said Barnhart, the DCC’s principal investigator since 2011. “For instance, we’re increasingly looking at whether patients’ particular genes make them more susceptible to liver injury when taking certain drugs. And while that research is still exploratory, we’re collecting DNA in the hopes of a significant discovery one day.”

Establishing a diagnosis of DILI can be tricky due to the presence of other potential causes, and the injury can range from mild and transient to severe and protracted, according to Barnhart. To help distinguish causes, the DCC has developed standardized procedures that identify and characterize cases. DILIN researchers are also preparing to conduct controlled, clinical studies that will include collection of more data, serum, DNA, and tissue specimens.

About 20 percent of DILI reports are now related to herbal and dietary supplements, Barnhart said.

“We are seeing more and more patients now with injuries due to supplements, and that trend has been growing over time,” she said. “So we’re seeking more data to fully understand what is going on with those supplements – they’re unregulated, of course, and manufacturers don’t always reveal every ingredient. Running chemical analyses on these products now is helping to reveal illegal and potentially dangerous drugs not on the label.”

In 2013, an outbreak of acute liver injury was attributed – with data from the DCC – to a multi-ingredient nutritional supplement marketed for weight loss, bodybuilding and energy-enhancing aid. The DCC researchers noticed a spike in enrollment due to this supplement in the specific time period and shared the data with the FDA. One of the company’s products was found to contain a synthesized version of aegeline, an herb naturally found in Southeast Asia. In 2013, more than 40 cases of acute hepatitis, including several instances of acute, fatal liver failure, were linked to the same product. Under pressure from the FDA, the product was withdrawn from the market.

“With real-time monitoring of liver injuries, our data can help the FDA with early detection,” said Barnhart. “While the agency doesn’t have the oversight to regulate these products, they can still visit the company and send a warning letter to stop production and potentially save lives.”

The DCC also collaborates with LiverTox, a government website launched in 2012 to provide up-to-date and comprehensive information on DILI by sharing case studies with healthcare providers and specialists. The site covers an increasing number of commercially available drugs and supplements suspected to cause injury.

“We provide LiverTox with a case registry to help with scientific analysis and the clinical patterns of liver injury,” said Barnhart. “The registry allows secure submission of specific cases to highlight trends due to different medications. Drug records on LiverTox reveal the hepatoxicity of individual agents – so far, more than 1,000 agents have been described and indexed.”

The DCC’s research is also finding racial variations in DILI by collecting more data from African-American and Hispanic patients. Genome-wide association studies help detect and confirm specific genetic risk factors, and study data could support the use of genetic variants as biomarkers for susceptibility to DILI for a given medication.

“We’re especially seeing variations in the human leukocyte antigen region, which helps regulate the human immune system,” said Barnhart. “There may be a rare variant in that region of the genome that makes such patients more susceptible to DILI. So the next stage in our research will include deep sequencing in that region.”

Data management has also evolved since DILIN’s start 15 years ago. Collection began with paper case report forms before the data were migrated to InForm, an electronic data capture (EDC) platform, used until earlier this year. The DCC recently moved the DILIN data entry platform to RaveX, a web-based EDC that allows data entry anywhere with internet access, according to the DCRI’s Katherine Galan, data management project leader on DILIN since 2009.

“We’re the first project at the DCRI to use RaveX,” Galan said. “Making that first switch was quite a feat because enrollment is always ongoing with DILIN. While many of the sites are still adapting to the new database, in the long run, we expect the system to be much easier than anything we’ve had before.”

“Part of the challenge is that DILIN is a very complex study, and not always straightforward. With a new grant every five years, in a sense we’re always in start-up mode with new amendments and protocols. And now with this new grant including a clinical trial, it will be very interesting to see how the process evolves.”

The network’s first clinical trial, made possible by its latest grant renewal, will look at how patients might be treated with liver injury, according to Barnhart.

“In most cases, they have needed to stop the drug and recover from their injury,” she said. “But through the new clinical trial, we hope to identify treatments for those patients with severe liver injury and not recovering after stopping the drug.”

“These are some of the ways we can have the most impact on the general public,” Barnhart said. “It’s all about making sure that safe medications are prescribed to patients and that only safe herbal and dietary supplements are on the market.”