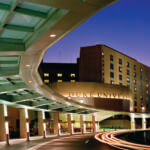 Duke University Hospital has been named to the national Honor Roll as the No. 19 medical center in the country by U.S. News & World Report, which released its annual hospital rankings today.

Duke University Hospital also remains the No. 1 hospital in North Carolina and No. 1 in the Raleigh-Durham metropolitan area.

Honor Roll designations were awarded to the top 20 hospitals out of nearly 5,000 institutions across the country. Rankings consider patient safety, survival rates, technology, and the hospital’s excellence in a number of specialties.