Primary results of the GUIDing Evidence Based Therapy Using Biomarker Intensified Treatment (GUIDE-IT) study were published August 22 in the Journal of the American Medical Association, the official journal of the American Medical Association. GUIDE-IT was a prospective, randomized, controlled, unblinded, multi-center clinical trial of biomarker-guided therapy in patients with heart failure (HF), conducted between January 2013 and September 2016 at 45 clinical sites in the United States and Canada. 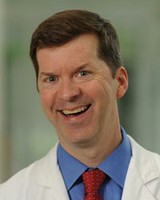 “During the course of the GUIDE-IT study, our aim was to try and address whether the adjustment of heart failure therapy using a specific blood test called NT-proBNP could improve care in patients with heart failure,” said DCRI’s Michael Felker, MD, principal investigator of the trial (pictured).

“We wanted to develop a precision medicine approach to personalize treatment depending on how the patients were responding to treatment, as measured by this biomarker,” Felker said.

The study initially planned to randomize 1,100 high-risk subjects with HFrEF and elevated natriuretic peptide levels within the first 30 days and a history of a prior HF event to either an NT-proBNP-guided strategy or usual care. However, the Data and Safety Monitoring Board, an independent group of experts who monitor patient safety and treatment efficacy data while a clinical trial is ongoing, halted the study when 894 of the planned 1,100 patients had been enrolled and followed for a median of 15 months due to lack of efficacy.

The findings of the study revealed that in high-risk patients with HFrEF, a strategy of guiding therapy based on concentrations of NT-proBNP was not more effective than a usual care strategy in reducing the composite endpoint of time-to-first HF hospitalization or cardiovascular death.

“There are several different possibilities that could explain the results and one of them is the very good quality of usual care provided to patients in the usual arm of the study,” said Felker. “The investigators in the GUIDE-IT study were mostly cardiologists with interest and expertise in heart failure, which may have contributed to how the results turned out.”

The researchers believe that with the trial concluded and the results widely available, the data from the GUIDE-IT study will prove crucial to the understanding of HF and provide much-needed insights into how HF is treated.

“Going forward, we will be looking carefully at the data to identify subgroups of patients who could benefit from NT-proBNP-guided strategy. Even though the trial was neutral we are hoping it can be a platform for generating new knowledge to help patients with HF,” Felker said.

The study was funded by the National Heart, Lung, and Blood Institute.