Results from the Novel Micra Continued Evidence Development (Micra CED) post-approval study confirm the safety and efficacy of a novel tined leadless pacemaker and reveal promising insights about how this novel device can improve patient outcomes.

Results from the study, which were presented virtually as a late-breaking session at the Heart Rhythm Society 2020 Science program, showed that patients who were treated with the Micra Transcatheter Pacing System, a novel tined leadless pacemaker developed by Medtronic, had a lower rate of complications in follow-up compared to those patients who received a conventional transvenous pacemaker. 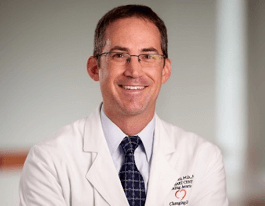 One in eight patients may experience a complication with the traditional pacemakers, explained the DCRI’s Jonathan Piccini, MD, MHS, who led the study and gave the presentation. Leadless pacemakers eliminate the complications associated with pacemaker pockets and transvenous leads.

The Micra IDE study, a pivotal study conducted between 2013 and 2017 to assess the safety and efficacy of Micra, found a 48 percent reduction in complication risk when compared to historical studies of transvenous pacemakers. A key question was whether these same benefits would be identified or generalizable in routine clinical practice. The Micra CED pragmatic comparative effectiveness study sought to compare not only complications for patients at 30 days and at 6 months, but also the rate at which patients experienced a need for pacemaker system revision or all-cause mortality. Micra CED identified a 63 percent lower risk of complications in follow-up at 6 months.

Micra CED utilized a unique pragmatic design that focused on patients 65 years of age and older who received a de novo pacemaker within the Medicare program. In the nationwide cohort, 5,700 patients who received a Micra leadless pacemaker were compared to 9,600 patients who received a transvenous pacemaker. Because the investigators were interested in determining whether results from prior Micra studies, including the IDE trial, were generalizable to a wider population, they paid special attention to characteristics of the patient populations in each study. Patients in Micra CED had higher rates of comorbid illness, including a nearly three-fold higher prevalence of heart failure and a greater than two-fold higher prevalence of COPD when compared to the pivotal Micra IDE trial.

The Micra CED study team found no significant difference in overall complications between the two groups of patients 30 days after receiving the device. The group that received Micra had lower rates of device-related complications, but higher rates of complications related to the access site and higher rates of cardiac effusions/perforation. However, the latter event rate was less than 1 percent in both groups.

The study team found no significant difference in the study’s other two objectives: rate of system revision and all-cause mortality.

“These results show promise for the many patients who rely on permanent pacing as an essential therapy,” Piccini said. “The Micra CED study reinforces what we have seen in prior studies. Patients who received Micra leadless pacemakers experienced improved outcomes over the long term, including lower rates of complications at six months. Not only does this study illustrate the feasibility of utilizing real-world data to generate evidence and measure the effectiveness of new technology, but it provides needed information that will help clinicians in shared decision-making with their patients.”