May 5, 2015 – The DCRI’s Andrew Muir, MD, MHS, led the trial, which examined the effects of a three-drug combination on patients with HCV-related cirrhosis of the liver.

A 12-week dose of an investigational three-drug hepatitis C combination cleared the virus in 93 percent of patients with liver cirrhosis who hadn’t previously been treated, according to a study in the May 5 issue ofThe Journal of the American Medical Association.

Bristol-Myers Squibb funded the trial of the combination of three drugs — daclatasvir, asunaprevir, and beclabuvir. None of the three drugs are approved by the U.S. Food and Drug Administration (FDA), but daclatasvir is currently under review by the FDA. Duke Medicine researchers collaborated on the design and analysis of the trial and authored the findings. 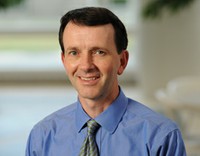 The trial recruited patients with hepatitis C-related cirrhosis, or scarring of the liver, 112 of whom had not previously been treated for hepatitis C, and 90 who had previous unsuccessful therapies. For those with past failed therapies and potential resistance, the drugs were slightly less successful, eliminating the virus in 87 percent.

However, for those with past failed therapies, incorporating a fourth drug, ribavirin, appeared to enhance results. Ribavirin is a commonly used hepatitis C treatment. When added to the investigational regimen, success rates in previously treated patients reached 93 percent — on par with those receiving treatment for the first time.

No vaccine has been developed to protect patients from the hepatitis C virus, which is spread through blood and can lead to liver failure and death if untreated. Most who are infected don’t know they have the disease until they have symptoms and have already sustained liver damage, said Andrew Muir, MD, MHS, chief of the division of gastroenterology at Duke and the study’s lead author. For this reason, Americans born between 1945 and 1965 — baby boomers — should automatically be tested, he urged.

For most of the past 20 years, therapies for hepatitis C relied on interferon drugs, which require regular injections for as long as one year and trigger miserable, flu-like side effects that prompt many patients to quit the regimen. Some patients aren’t eligible for this treatment if they have anemia, low platelets or other conditions, Muir said.

“Those with more advanced disease were unlikely to tolerate interferons, and many patients would decide against even getting treatment,” Muir said. “For those who could tolerate it, it was only moderately effective.”

Since late 2013, several drug companies have released new, interferon-free regimens. In many cases, these have proven to be more effective than previous treatments.

“The development of interferon-free treatments has been a tremendous step forward in the standard of care,” Muir said. “These drugs are highly effective and well-tolerated by patients at all stages of liver disease.”

The trial was conducted between December 2013 and September 2014 at nearly 50 sites across the United States, Canada, France, and Australia. All patients were infected with genotype 1 hepatitis, a common strain of the C virus in North America, Western Europe and Australia.

The drugs had minimal side effects for most participants. Nine patients experienced serious adverse events three of which were considered related to treatment, the study states.

Among the study’s limitations were the absence of a placebo group that could pinpoint the sources of side effects, and a lack of racial diversity, with 88 percent white participants. The study also did not statistically distinguish the impact of the addition of ribavirin to some participants’ daily regimen.