January 15, 2019 – The DCRI has been on the forefront of research into the chronic and fatal lung disease.

Little is known about the cause of idiopathic pulmonary fibrosis (IPF), a devastating disease that is characterized by progressive scarring of the lung tissue that affects a person’s ability to breathe and leads to death within three to five years of onset.  However, a team of respiratory medicine researchers at the DCRI is working to advance understanding of the deadly disease across the translational and clinical research spectrum.

The DCRI has been making strides in IPF research since 2005, when it became the coordinating center for IPFnet, a network of 26 clinical sites that was designed to conduct multiple clinical trials in the IPF space. Kevin Anstrom, PhD, director of biostatistics for the DCRI, was the principal investigator for IPFnet’s data coordinating center until 2014 and designed the clinical trials conducted within the network.

“IPFnet as a whole really changed the field and benefited everyone, including patients,” Anstrom said. “It not only cleared the way for other treatments to be introduced to market, but it also removed toxic therapies and gave patients more choice for their treatment.”

IPFnet helped set the stage for further research, Anstrom said; for example, many of the same clinical sites and investigators involved in IPFnet are now involved in the DCRI’s ongoing IPF-PRO registry. 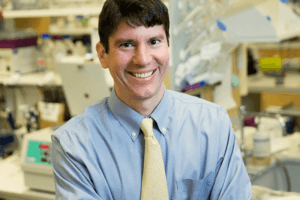 The IPF-PRO registry, which began in 2014 when the DCRI partnered with Boehringer-Ingelheim, follows patients with IPF for at least three years. Scott Palmer, MD, MHS, (pictured left) director of respiratory research at the DCRI and principal investigator for IPF-PRO, works on the registry along with the other members of the IPF-PRO team, which includes Laurie Snyder, MD, MHS; Jamie Todd, MD; Megan Neely, PhD; Eric Yow, MS; Emily Obrien, PhD; and Rosalia Blanco.

The IPF-PRO registry recently hit a milestone when it reached its goal of enrolling 1,000 patients. Although work with the registry continues, it has already resulted in 28 papers, abstracts, or presentations. As patients are followed out to longer time points, the study will provide increased ability to identify clinical factors and biomarkers that predict disease progression. In addition, the study captures information regarding the impact of the disease upon patient quality of life and will help clinicians and patients better understand the full impact of the disease and its treatment on patient-centered outcomes.

The team has also received funding to begin work on the second phase of the project. Concurrently with IPF-PRO, DCRI researchers will launch a parallel study called Interstitial Lung Disease-PROspective Outcomes (ILD-PRO), which will enroll non-IPF patients with interstitial lung disease (ILD). Boehringer-Ingelheim will also fund the new study and has committed $15 million, which will carry the study through 2025.

The study will focus on non-IPF patients, whose diseases are not considered “idiopathic” because a cause for the fibrosis has been identified. Even though they do not have IPF, some non-IPF ILD patients develop a progressive phenotype that mirrors IPF, Palmer said.

ILD-PRO will enroll these newly progressive patients and study patient data in much the same way as IPF-PRO in an attempt to understand the impact on patients’ quality of life, predictors of survival, and disease progression. All of the 47 active clinical sites that participate in IPF-PRO will also participate in ILD-PRO.

“It’s building upon what we already did (with IPF-PRO) and leveraging the collegial relationships we have with everybody involved,” Palmer said. “The beauty of having these two parallel studies is investigators can compare and contrast clinical factors and biological factors across interstitial lung disease, between IPF and what’s classified as non-IPF ILD to understand their underlying similarities and differences.”

The IPF-PRO registry also includes a biorepository of blood samples collected from patients, including DNA, RNA, serum, and plasma. This material, which was collected at patient enrollment and then at approximately six month intervals, will allow researchers to better understand biomarkers of IPF and how they are linked to IPF progression, said Jamie Todd, MD, co-chair of the IPF-PRO biomarkers committee.

“Right now, there are no FDA-approved biomarkers that could help clinicians with diagnosis and prognosis for IPF, so we are currently in a discovery phase with an ultimate goal of identifying some of those biomarkers,” Todd said. “In addition, because there are two relatively new treatments that have come onto the market since 2014, we may be able to identify biomarkers that indicate response to treatment.”

Because the team needed a control group to compare to the IPF population, it partnered with another study called the MURDOCK Study to identify a group of people who did not have lung disease.

Now, Todd said, the team is not only able to make comparisons among individuals with IPF, but can also understand what differences appear between a healthy person and a person with the 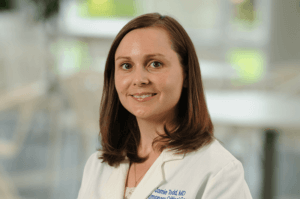 With the launch of ILD-PRO, the team will be following the same process to build a new biorepository with the ILD patient samples. Once the ILD repository is built, Todd hopes to compare the material to both the IPF and healthy repositories and conduct similar analyses. If biomarkers can help to understand disease mechanisms, she said, they can also assist in developing better treatments.

“Before IPF-PRO, there was no large, multicenter IPF biorepository in the United States,” Todd said. “This biorepository distinguishes IPF-PRO from other ongoing IPF registries in the U.S. and abroad. Now that the infrastructure exists, there are many opportunities for us to do some high-end, translational science in partnership with BI and our IPF-PRO site investigators.”

In addition to the studies, the DCRI is also running NHLBI-funded clinical trials in the IPF space.

Anstrom is currently working on a trial he designed, CleanUP IPF.

The trial, which will enroll 500 patients and become the largest randomized study in the IPF space, seeks to determine whether two antibiotics, co-trimoxazole and doxycycline, help improve IPF outcomes. Both drugs will be tested against standard care.

“This type of high-dose treatment of antibiotics isn’t targeted at the fibrosis; rather, it’s used to prevent infections that could create other problems for IPF patients,” Anstrom said. “Previous literature suggests this approach has been helpful in cancer and other diseases. It would be valuable if it could also be applied to IPF because these therapies are affordable. The two treatments currently on the market are expensive, and there is no evidence that they reduce mortality.”

Each of these studies will benefit from the years of IPF research conducted by the DCRI. This community of researchers, Palmer said, has helped advance the state of IPF science. Another important component, he said, is that the DCRI’s clinical faculty on the IPF studies are physician investigators who treat people with IPF.

“I’m a physician, so I see patients with IPF every week, take care of them, and recognize the tremendous unmet needs associated with the disease,” Palmer said. “IPF research is a wonderful example of the strengths of the collaborative team at the DCRI. Our projects span from outcome registries to trials and include clinical and biostatistics faculty as primary investigators. We have built a network of really well-aligned investigators who care about IPF and about doing multi-center clinical research to move the field forward.”