May 30, 2019 — Researchers examined clinical factors at the time of a patient’s enrollment in the IPF-PRO registry that might predict lung transplant or death.

Patients in a recent study on idiopathic pulmonary fibrosis (IPF) had about a 50 percent chance of dying or having a lung transplant over the course of the 30-month study, according to findings recently published in Respiratory Research.

The study, which is also highlighted in a recent blog and podcast, examined data from 662 patients with IPF, a progressive and fatal lung disease. These patients were the first of 1,000 to enroll in the IPF-PRO registry, a partnership between the DCRI and Boehringer-Ingelheim to learn more about the disease. All patients were enrolled between June 2014 and October 2017. 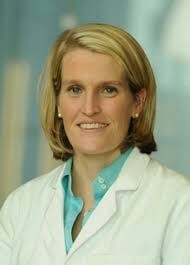 The study, led by the DCRI’s Laurie Snyder, MD, MHS, (pictured), examined clinical factors at time of patient enrollment that might predict lung transplant or death. In order to be included in the study, patients had to have been diagnosed with IPF or newly confirmed at a site within the six months prior to the study’s beginning.

The clinical factor that most strongly predicted lung transplant or death was oxygen use at rest, which was associated with a three-and-a-half fold increase in either outcome over the follow-up period.“Interstitial lung diseases like IPF don’t allow oxygen to diffuse across lung tissue,” Snyder said. “Patients who need oxygen not only while walking, but also at rest, are likely more advanced in their disease state and have a higher risk of the outcomes we were examining.”

Patients who had worse lung function were also at greater risk. Lung function was measured at enrollment by forced vital capacity and diffusion capacity, or the capacity of the lungs to exchange oxygen. Patients who scored progressively lower on each of these measures were more likely to need a lung transplant or die before the study’s end.

The study also showed a relationship between age and outcomes. The data collected showed a J-shaped curve, with the youngest patients (around 50 years old) at the highest risk. Risk of lung transplant or death then declined until about age 62, and then escalated again as age increased.

Snyder hypothesizes this could be because the youngest patients have a familial form of IPF, which could be more devastating than non-familial IPF.

“Results like this are the power of the IPF-PRO Registry,” Snyder said. “This is one of the first times we’ve had multicenter data to examine that represents the real world, without limitations on age range or pulmonary function.”

Assistance for the study also came from the DCRI call center.

“Participation in a registry doesn’t mandate that patients come back to a participating center,” Snyder said. “The call center was able to provide a touchpoint to patients and help with data collection, which helped us figure out whether patients had been hospitalized or received lung transplants.”

Next steps for the registry and this research include a move toward longitudinal data. Snyder said the team plans to examine whether changes in clinical factors better predict mortality than singular data points collected at enrollment in the registry.