Mary E. Klotman, MD, a pioneering physician-scientist and nationally recognized leader in academic medicine, will become the next Dean of the Duke University School of Medicine and Vice Chancellor for Health Affairs, announced A. Eugene Washington, MD, Duke Chancellor for Health Affairs and President and CEO of the Duke University Health System (DUHS). Klotman will assume this role July 1, 2017. For nearly seven years, she has served with distinction as the Chair of Duke’s Department of Medicine.

“Mary Klotman is a visionary leader, deft executive administrator, and congenital collaborator with an unwavering commitment to excellence,” said Washington. “She has amply demonstrated her exceptional ability to engage diverse groups to successfully advance all the missions of our academic health syste 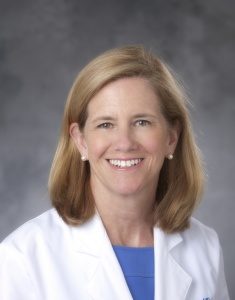 m. I am confident Mary will continue to excel in capitalizing on the enormous talent and promise of our people in Duke Health to improve health worldwide.”

Klotman has been a national leader in science and academic medicine through her roles in the Alliance for Academic Internal Medicine where she is President of the Association of Professors of Medicine and her role on the Council for the Association of American Physicians. Throughout her career she has served on numerous NIH study sections that have informed the direction of research in HIV. She is also a member of the National Academy of Medicine, formerly the Institute of Medicine.

“The next leader of the Duke University School of Medicine needs to have keen instincts about how to best support clinical and basic research while adapting nimbly and creatively to a changing health landscape,” said Duke University President Richard Brodhead. “In Mary Klotman, Duke has found a dean with all the tools to do this job brilliantly. She has impressed colleagues across the university with her strength of purpose, clarity, judgment, and love of Duke. Duke Health can look forward to a great new chapter with Mary in this new role leading the School of Medicine.”

Over the past three decades, Klotman has amassed a record of sterling achievements as a scientist. She and her long-standing collaborators clearly identified HIV in cells unique to the kidney and have demonstrated a separate evolution of the virus in the kidney that now has led to additional critical questions as the science moves toward strategies for cure. The group also identified the contribution of specific viral proteins to the pathogenesis of HIV-associated nephropathy. While advancing the science of HIV, the collaborative nature of the group supported the early careers of a number of investigators.

At Duke, Klotman has led the Department of Medicine during a period of robust growth and national acclaim, while also contributing significantly to the broader Duke Health enterprise. As chair, she has recruited and appointed a group of highly talented division chiefs (9) and vice chairs, and Duke has now climbed to the number three department of medicine in the country in NIH research funding. The department has also consistently recruited a diverse and exceptionally talented housestaff. In addition, she has championed faculty/trainee career development programs including the creation of the Lefkowitz Society for research intensive trainees, and Career Academies for the faculty. Through her roles as Chair of the Board of the Private Diagnostic Clinic, membership on the Board of Directors of DUHS and positions on institutional leadership committees, she has tirelessly sought to align the success of the department with the success of the institution.

Klotman was selected following a national search by a 23-member search committee (see below), comprised of representatives from across the Duke Health and Duke University communities, and led by Theodore Pappas, MD, and Blanche Capel, PhD.

Klotman will oversee one the nation’s top medical schools, and she will partner closely with Duke Health leadership to establish a more integrated clinical enterprise.

“I am tremendously honored and humbled to have been selected as the next Dean of what I know to be among the finest medical schools in the country,” said Klotman. “Duke’s greatest strength is its people and I look forward to working collaboratively with colleagues within Duke Health and across Duke University to further advance this institution that has so profoundly influenced me.”

Prior to coming back to Duke, Klotman served as the Chief of the Division of Infectious Diseases at Mount Sinai for 13 years. In addition, she was the co-director of Mount Sinai’s Global Health and Emerging Pathogens Institute, a program designed to translate basic science discoveries into clinical therapeutics for newly emerging and re-emerging infectious diseases. Before Mt. Sinai, Klotman worked at the National Institutes of Health in the Laboratory of Tumor Cell Biology under the direction of Robert Gallo.

Klotman and her husband Paul, who is CEO, President and Executive Dean of Baylor College of Medicine, have two adult sons, Sam married to daughter-in-law Jessica, and Alex.

“Today is a great day for our School of Medicine, Duke Health, and Duke University,” said Washington. “We are very fortunate to have Mary Klotman as our next Dean and Vice Chancellor.”