June 26, 2019 – The DCRI surveyed patients to quantify the benefits and harms of esketamine, a drug recently approved to treat individuals with treatment-resistant depression.

A patient preference survey designed and conducted by the DCRI’s Preference Evaluation Research (PrefER) group was presented to the FDA prior to its recent approval of a treatment for patients with treatment-resistant depression. 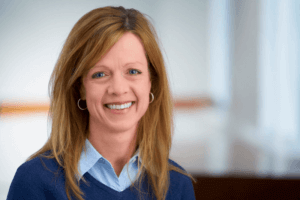 The survey, which was conducted by the DCRI’s Shelby Reed, PhD (pictured); Juan Marcos Gonzalez, PhD; F. Reed Johnson, PhD; and Angela Fairchild, assessed patient preferences related to potential benefits and harms associated with esketamine. Esketamine had been shown in early clinical studies to rapidly improve depressive symptoms, but there were potential risks like permanent cystitis and cognitive impairment that had been observed in individuals abusing ketamine, a molecule similar to esketamine.

The survey was administered to two patient cohorts: 161 patients enrolled in clinical trials of esketamine and 301 respondents from an online panel who were identified as having a medical history consistent with treatment-resistant depression.

The DCRI team used the survey results to determine that in exchange for varying levels of improvement in depression symptoms, patients were willing to accept certain levels of risk of permanent and severe bladder problems, as well as a risk of permanent cognitive impairment. Results showed that respondents placed the greatest value on mood improvement and reduced chance of cognitive and memory problems.

The results of the DCRI survey were included in a presentation to the FDA advisory committee. During the meeting, two of the panelists noted that the survey results influenced their voting decision on the benefit-risk of esketamine.

“The impact of this survey and its results prove the importance of taking patient preferences into account,” Reed said. “Studies such as these can be helpful to reviewers who are charged with making value judgements about benefit-risk tradeoffs on behalf of patients.”