October 28, 2019 – The DCRI’s Sarah Armstrong, MD, served as the lead author for a policy statement and a co-author on a technical report advocating for more widespread use of bariatric and metabolic surgeries for children and adolescents with obesity.

Weight-loss surgery should be used more widely among children with severe obesity who qualify for the procedure, according to recently published guidance issued by the American Academy of Pediatrics (AAP) and co-authored by DCRI pediatrician Sarah Armstrong, MD (pictured). 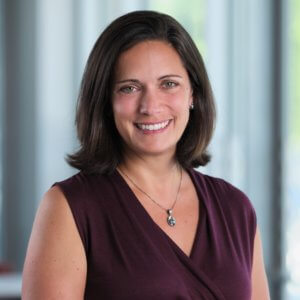 Armstrong, who is a member of the executive committee of the AAP Section on Obesity, served as the lead author for a policy statement and a co-author on a technical report issuing recommendations for use of pediatric bariatric and metabolic surgeries. The authors examined prior studies on the surgery in pediatric populations and drew on data from observational cohort studies, case-control series, retrospective case reports, and expert opinion. The guidance includes recommendations for pediatricians, medical centers, and public and private insurers both at the practice-level and at the system-level.

Nearly 4.5 million adolescents in the U.S. have severe obesity, and the AAP’s policy statement advocates for a higher proportion of these children to be considered for surgery. Bariatric and metabolic surgery have been shown to be safe and effective treatment options for pediatric populations, defined as individuals younger than 18. Although lifestyle modification has achieved moderate short-term success, no evidence supports its long-term efficacy. In one study examined in the AAP policy statement, a group that participated in a lifestyle modification treatment program saw an increase in BMI. The AAP states that no current evidence supports age limitations to the surgery; instead, key considerations such as BMI, comorbid health conditions, and quality of life should be taken into account on a patient-by-patient basis.

Examination of existing data around pediatric weight-loss surgery also revealed that minorities and individuals of lower socioeconomic status both experience wide disparities in insurance authorization for the procedure. Less than half of candidates who qualified for the surgery received insurance coverage.

“Children with severe obesity develop health problems earlier than those with lesser degrees of obesity, including diabetes, high blood pressure, fatty liver disease, and sleep apnea,” Armstrong said in a news release issued by the AAP. “While lifestyle changes remain the mainstay of treatment, medical care is unlikely to significantly change the trajectory for most children with severe obesity. The last decade of evidence has shown surgery is safe and effective when performed in high-quality centers, with the primary care pediatrician and family in a shared decision-making process. Unfortunately, we see significant disparities in which patients have access to bariatric surgery. Surgery needs to be an option for all qualifying patients, regardless of race, ethnicity or income.”

Learn more about the AAP guidance by listening to an interview with Armstrong on the Lynn Martin Show on AM800 CKLW.