December 14, 2018 – New research points to evidence that a nonpharmacological treatment option could reduce opioid use in patients with musculoskeletal pain.

George worked with Stanford University’s Eric Sun, PhD, MD, and other DCRI faculty members, including Chad Cook and Adam Goode, to analyze a proprietary database that pulls from insurance claims and other data recorded during routine patient visits. The team, whose research was published today in JAMA Network Open, reports that when patients with low back, shoulder, knee, or neck pain sought physical therapy early, their subsequent opioid use for the following year was reduced by approximately 10 percent. 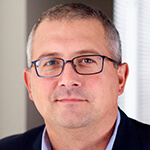 George, the DCRI’s director of musculoskeletal research, said he initially became interested in the association between physical therapy and opioid use because of the patients he saw in his clinical practice as a physical therapist, which suggested that nonpharmacological treatments for back pain patients could have protective effects against long-term opioid use.

The most recent study expanded beyond previous research in back pain to determine whether the protective effect would also apply to patients with neck, knee, and/or shoulder pain.

“Because the CDC guidelines and the American College of Physicians guidelines are pushing toward early non-drug options for patients, this was an opportunity for us to look at a real-world data set to see what one of the non-drug options looked like across the four most common musculoskeletal pain conditions,” George said.

There is no standard definition for what constitutes early physical therapy, George said, but the new study focused on patients who received physical therapy within 90 days of their index date. The study also only included patients who were opioid naïve, meaning that they had not used opioids within a year before their index date. The researchers examined data from almost 89,000 patients with back, neck, knee, or shoulder pain between 2007 and 2015.

The exception for dosage was patients with neck pain, as results for this group were not statistically significant. George said there could be several reasons why the neck pain group did not show the same results as the other pain groups. Neck conditions could be more resistant to physical therapy, or could initially be prescribed higher dosages of opioids.

George acknowledges that to further expand use of nonpharmacological treatments, health care systems will need to change established delivery patterns. “Because the system is set up to deliver prescriptions, it’s a lot easier for it to do that than deliver nonpharmacological interventions,” he said. “However, the opioid crisis has led to awareness that the system needs to improve in delivering on these interventions if we are going to successfully reduce unnecessary exposure to opioids for pain relief.”