June 4, 2019 – The team used pharmacokinetic modeling to assess how the drug would behave in children, leading to FDA approval without conducting a pediatric clinical trial.

For the first time, pediatric patients with Lambert-Eaton myasthenic syndrome (LEMS) have a treatment that has been approved by the U.S. Food and Drug Administration (FDA).

A team that included researchers from the DCRI was involved in developing the supporting evidence that led to the FDA’s approval of Ruzurgi (amifampridine) tablets. In a relatively rare occurrence, the drug was approved for a patient population in which it was not tested in a clinical trial. 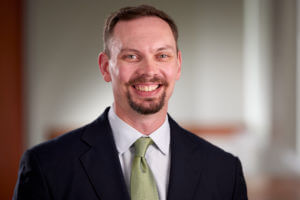 Instead, the DCRI’s Jeffrey Guptill, MD, explained, the DCRI Pharmacometrics Center was able to embark on a project, led by Huali Wu, PhD, that used data from a trial in which the drug was given to adults. These data were used for pharmacokinetic modeling to predict how the drug would behave in patients aged 6 to less than 17.

“Mathematical models were developed to predict how amifampridine moves through the adult body,” Guptill (pictured) said. “We adapted these models to fit children with LEMS, which helps us draw conclusions about the drug and determine appropriate dosing in this population.”

LEMS is a rare autoimmune disorder that affects the communication between a patient’s nerves and muscles, causing weakness and other symptoms. Duke has one of the highest concentrations of LEMS patients in the U.S.