The Pokémon Go craze that spurred millions of people to collect virtual monsters via a smart phone app might have also had a health benefit by encouraging people to get up and walk.

A small study at Duke Health found that some people who played the game added thousands of steps a day. The finding — presented at the American Heart Association’s Epidemiology and Prevention / Lifestyle and Cardiometabolic Health meeting in Portland, Ore. — suggests that it’s possible to design fun ways to increase physical activity. 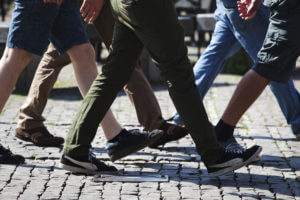 “Lack of enjoyment and lack of time are the most common reasons for not being physically active,” said lead author Hanzhang Xu, a PhD student at Duke University School of Nursing. “So incorporating physical activity into the gameplay on mobile devices could provide an alternative way to promote physical activity.”

The Duke team recruited 167 iPhone users who had played Pokémon Go in July 2016. The researchers designed an online survey and asked participants to provide screenshots of their daily steps reported by the iPhone Health app between June 15 and July 31, 2016. They then compared their daily steps before and after playing Pokémon Go.

The findings were particularly encouraging among participants who had low activity levels or were overweight before playing Pokémon Go, with these players adding nearly 3,000 steps a day after playing the game.

“We think our study could have implications for the design of other digital health interventions that encourage people to exercise more,” Xu said.