March 18, 2020 – The study sought to simultaneously test a method for identifying individuals at high risk for Alzheimer’s disease while testing the efficacy of a potential treatment aimed at targets affecting cellular bioenergetics.

A DCRI faculty member was involved in an innovative study that sought to prevent or delay the onset of symptoms in people at risk for developing Alzheimer’s disease.

The TOMMORROW study, named after TOMM40 ‘523, a gene thought to be associated with cognitive decline, had two goals: 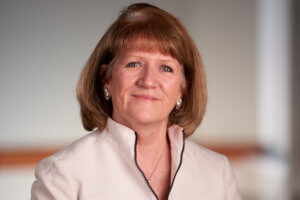 Although the study was terminated before its planned completion because a prespecified efficacy analysis revealed the drug was not effective, the DCRI’s Kathleen Welsh-Bohmer, PhD, who was a member of the study team, said the trial’s design and data still contributed to important learnings for the design of future studies in the field. A paper detailing the design of the study was recently published in Alzheimer’s & Dementia: Translational Research & Clinical Interventions.

The trial was unique in that it explored efficacy of a treatment during the silent stages of disease. Prior to this study start, clinical trials for Alzheimer’s disease focused only on the symptomatic stages of the illness. This study was the first of its kind in many ways, requiring new endpoints for determining treatment effects, new ways of identifying eligible participants who are cognitively normal but at risk for imminent disease expression, and new methods for retaining these participants over long study period of four to five years.

The planning for TOMMORROW occurred between 2009 and 2013, well before the FDA issued guidance on drug development in early Alzheimer’s in 2018. The trial enrolled its first patient in 2013 and ran until 2018. The study was event-driven, and the primary endpoint was a clinical diagnosis of mild cognitive impairment due to Alzheimer’s disease that was verified by an expert adjudication committee and was confirmed over repeated assessment six months apart.

The study design paper outlines the elements of this trial that might be generalized to other studies in the preclinical stages of Alzheimer’s disease. One particularly unique aspect was the decision to embed the validation of a novel genetic biomarker algorithm within the overall trial design, in addition to testing the efficacy of a potential treatment. The authors explain that “the urgent societal need for an impactful therapeutic option in AD motivated a TOMMORROW study design that aimed to pursue [both efforts] within the same study, instead of conducting each study sequentially.”

The TOMMORROW study has produced a rich dataset of nearly 3,500 healthy individuals older than 65 followed for up to four years with detailed clinical and neuropsychological evaluation every six months.  This dataset will allow investigators to model the early clinical transitions of disease in a population enriched for risk of developing symptoms over the next five years.  The full study report from this unique trial has been completed, and results will be published later this year.