March 5, 2019 – The DCRI leads one study and serves as the scientific data research center for the other.

Research shows that prevalence of urinary stone disease doubled in men and quadrupled in women between 1984 and 2012. As experts scramble for answers on how to quell this unwelcome spike, researchers with the Urinary Stone Disease Research Network are currently conducting two trials to learn more about who develops kidney stones, what the best treatments are, and how to prevent stones from forming. 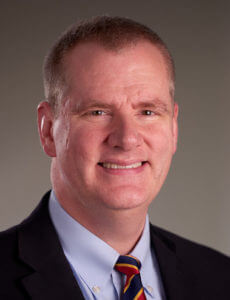 The first study, Prevention of Urinary Stones with Hydration (PUSH), has been testing its own hypothesis; namely, that a high-tech water bottle might be one way to reduce the recurrence of the urinary stone disease, commonly referred to as kidney stones. Funded by the National Institutes of Health (NIH), the study’s primary aim is to determine whether use of a “smart” water bottle to stay hydrated, along with a program of financial incentives and health coaching, will result in reduced risk of kidney stone recurrence over a two-year period. The trial is supported by the National Institute of Diabetes and Digestive and Kidney Diseases (NIDDK), a part of NIH.

“If you have experienced kidney stones in the past, you’re at a high risk of getting them again,” said Charles Scales, MD, associate professor at the DCRI and one of the study’s principal investigators (pictured). “Experts agree that one of the best ways to reduce your risk is to drink more water, but it’s not always easy to make changes to your regular lifestyle habits and maintain them over time. The PUSH study is investigating specific ways to encourage, motivate, and support people to achieve their fluid intake goals for the long term.”

The second study, STudy to Enhance uNderstanding of sTent-associated Symptoms (STENTS), is an observational study focused on mitigating pain and suffering from the use of ureteral stents in individuals with urinary stone disease.

“Urinary stone disease remains an important medical, scientific, and public health problem, and it is an extraordinarily painful one for those it affects,” said NIDDK Director Griffin P. Rodgers, MD, MACP.

PUSH and STENTS are currently enrolling at the following clinical centers:

To join the PUSH study, participants must be 12 years of age or older, have had at least one symptomatic stone in the past three years, have a low urine output (measured over 24 hours), own a smartphone, and meet other eligibility criteria, as outlined in the trial’s ClinicalTrials.gov page.

To participate in the STENTS trial, participants must be 12 years of age or older, have an upcoming ureteroscopy for kidney stones, and be willing to take surveys to record the stent experience.

The PUSH and STENTS studies are being conducted through the Urinary Stone Disease Research Network (USDRN), which is funded by the National Institute of Diabetes and Digestive and Kidney Diseases, a part of the National Institutes of Health. USDRN includes a group of scientists and investigators designing and conducting research on urinary stones in adults and children in order to learn more about who forms kidney stones, the best treatments, and how to prevent stones from forming. For more information, please visit http://usdrn.org.