An ongoing DCRI clinical trial seeks to determine whether an experimental lipid treatment is effective in preventing a second cardiovascular event in patients who have already had a heart attack.

Patients who have had a heart attack are at highest risk for stroke or a second heart attack in the months following their initial heart attack, said John Alexander, MD, (pictured left) DCRI’s investigator on the AEGIS-II trial. The study centers on whether an experimental lipid therapy called CSL112 could help reduce this risk.

CSL112, developed by CSL Behring, consists of apoA-1, a naturally occurring human protein that is part of high-density lipoprotein, also known as “good cholesterol” that removes cholesterol from plaques. In a 2016 DCRI coordinated study that proved the drug’s safety, CSL112 was found to reduce cholesterol buildup. AEGIS-II will enroll over 17,000 patients at about 1,000 sites worldwide and will examine the drug’s efficacy by determining whether this reduction in buildup also results in fewer recurrent cardiovascular events. 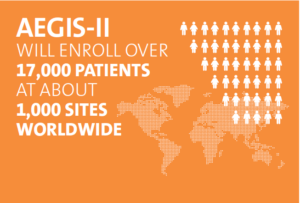 Participants in the study will receive four weekly infusions of CSL112 and will be followed for one year, the timeframe during which investigators expect to see maximum benefit. Patients will then be followed for a year to determine whether these effects are sustained.

The study is the next step in a partnership with CSL Behring and other academic collaborators that has been ongoing for almost a decade. Since initially discussing CSL Behring’s development program for the drug in 2010, the DCRI has partnered with them on three trials, all of which led to new discoveries that can improve clinical care.