November 25, 2019 – The exploratory study of patients with atrial fibrillation and on hemodialysis evaluated rates of bleeding when randomized to apixaban versus warfarin.

Apixaban may be a reasonable treatment option for patients with atrial fibrillation who also have renal disease and are receiving hemodialysis, according to late-breaking clinical trial results from RENAL-AF presented Saturday, Nov. 16 at the American Heart Association Scientific Sessions 2019.

Apixaban is one of a class of drugs called oral anticoagulants (OACs), which are used for stroke prevention in patients with atrial fibrillation. Previous trials, such as the DCRI-led ARISTOTLE, had shown apixaban, a newer OAC, to be superior in both safety and efficacy to the traditionally used warfarin; however, these drugs had not previously been tested in patients receiving hemodialysis to see if these results held true in a patient population with end-stage renal disease. 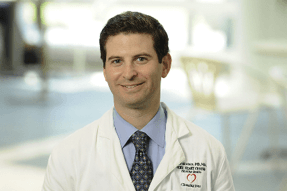 The DCRI’s Sean Pokorney, MD, MBA, was a member of the trial steering committee and presented the results of the study, which aimed to test the hypothesis that apixaban results in less bleeding than warfarin when given to patients on hemodialysis. Although the exploratory study was terminated early due to slower than anticipated enrollment, it revealed important findings that can be built upon in future studies. Notably, minority patients were underrepresented in the previous landmark trials evaluating the newer OACs, while 44.9 percent of the patients included in this study were black.

The study was underpowered, given the challenges with enrolling hemodialysis patients in this cardiovascular clinical trial.  The study found similar rates of major bleeding or clinically relevant non-major bleeding in both groups (25.6 percent on apixaban versus 22.2 percent on warfarin). Ongoing pharmacokinetic analyses may shed light that could help guide apixaban dose selection in this high-risk population.

“Bleeding rates and mortality rates are high in this population, and nearly three-quarters of the clinically relevant non-major bleeding we saw was associated with the hemodialysis access site,” Pokorney said. “Of course, any time a patient is taking an anticoagulant, measures to reduce bleeding, such as avoiding aspirin, should be considered. Although larger trials are needed, the first randomized data show us that apixaban may be comparable to warfarin when treating patients receiving hemodialysis.”