The DCRI’s mission is to translate knowledge gained from research into clinical practice in order to improve patient outcomes. Our long tradition of delivering on this mission was recognized this year when one of our studies was honored by the New England Journal of Medicine.

Prior to his retirement, Jeffrey Drazen, the journal’s former editor-in-chief, reflected on the studies the journal had published since his tenure began in 2000—more than 80,000 submissions and nearly 4,000 published studies. He selected what he called Drazen’s Dozen: 12 studies that were “practice-changing and lifesaving,” and the ARISTOTLE trial was included in the list. ARISTOTLE, published in 2011, was led by a team at the DCRI and the Uppsala Clinical Research Center in Sweden.

The ARISTOTLE study, spanning 39 countries and including more than 18,000 patients with atrial fibrillation, was a clinical trial that randomized patients to either apixaban or warfarin. Results showed that apixaban was superior to warfarin; not only was apixaban more effective at preventing stroke, but it also caused less bleeding and resulted in fewer deaths. 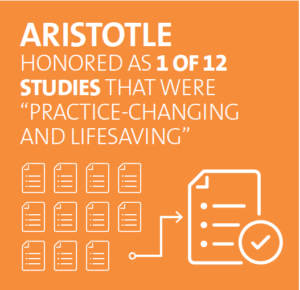 Although use of warfarin was prevalent prior to these findings, apixaban is now the most commonly initiated oral anticoagulant drug for patients with atrial fibrillation, said Christopher Granger, MD,(pictured left) the DCRI lead investigator on the study. Apixaban is easier to use because warfarin is associated with several food and drug interactions and requires monitoring.

“It is gratifying to be able to generate evidence that prevents strokes and saves lives,” Granger said. “The honor of being selected as one of the 12 most lifesaving studies from such an important journal aligns nicely with the DCRI’s mission to develop and share knowledge that improves patient care around the world.”