October 6, 2018 – The award, which recognizes infectious disease specialists under the age of 45, will be presented at ID Week in San Francisco.

The Infectious Diseases Society of America (IDSA) has presented its 2018 Oswald Avery Award for Early Achievement to the DCRI’s Susanna Naggie, MD, MHS, for her novel research on the treatment of patients co-infected with HIV and hepatitis C virus (HCV).

The award, which will be formally presented at ID Week 2018 in San Francisco, recognizes members or fellows of IDSA age 45 or younger who have demonstrated outstanding achievements in an area of infectious diseases.

“I was very surprised because I had no idea I’d been nominated,” Naggie said. “When I learned that two of my colleagues from outside of Duke nominated me, it meant a lot to know they found my work meaningful. As investigators we hope that our work is impactful and ultimately translates to improved health of our patients.” 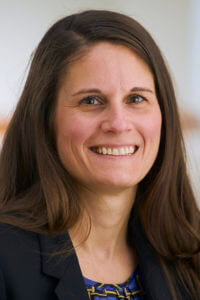 Naggie’s research focuses on the mechanisms of accelerated liver fibrogenesis in HIV/HCV-infected patients. Her work has helped define the role of pharmacogenomics and mechanistic studies of HCV treatment response in these patients, including studies of single-nucleotide polymorphisms in HCV therapy and associated liver disease.

Her group was the first to report that black patients who carried the favorable CC genotype had more immune dysregulation than non-black patients without the favorable genotype. This research has laid an important foundation for understanding the disparity in HCV treatment response in co-infected African Americans.

“I have had fantastic mentorship at Duke and in the DCRI as well as externally,” Naggie said. “[Former Gastroenterology director] John McHutchison and Shyam Kottilil enabled me to get exposure that laid the groundwork for the work that we accomplished early on and the work that is ongoing. Many others have given me opportunities, for which I am very appreciative.”

Currently an associate professor of medicine at Duke University School of Medicine, where she has been a member of the faculty since 2009, Naggie is medical director of the Department of Medicine’s Clinical Research Unit and director of infectious diseases research at the DCRI. In addition to her own research, she has served as the primary mentor for many trainees, including interns, residents, fellows, and junior faculty.

Naggie has served as a member and co-chair of the IDSA and American Association for the Study of Liver Diseases HCV guidance panel, as a member of the Department of Health and Human Services Panel on Antiretroviral Guidelines for Adults and Adolescents, and as a member or leader of several other notable national committees and groups. A graduate of Johns Hopkins University School of Medicine, Naggie completed her internship, residency, chief residency, and ID fellowship training at Duke, where she also earned a master of health sciences degree in clinical research.