In an announcement today from the Transcatheter Cardiovascular Therapeutics (TCT) conference in San Francisco, researchers concluded that using the radial approach (via the wrist) over the femoral approach (via the groin) significantly reduced bleeding or vascular complications for female patients undergoing cardiac catheterization or percutaneous coronary intervention (PCI).

These late-breaking findings come from data gathered in the Study of Access Site for Enhancement of PCI for Women (SAFE-PCI for Women) trial. Since its start in 2011, SAFE-PCI for Women has been breaking new ground in the United States both in its focus on radial catheterization, which is commonly used in Europe but not as often in the United States, and also by targeting female patients, who have traditionally made up less than 30 percent of participants in previous trials and have a higher bleeding risk. The results announced today were based on a sampling of more than 1700 women from 62 sites. 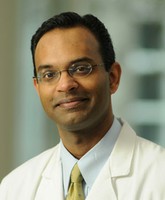 Sunil Rao, MD, (pictured right) the principal investigator for SAFE-PCI, explained that the trial looked at high-risk female patients. He said that although the data indicated that bleeding was significantly reduced using the radial approach in this group, because women have smaller radial arteries and are more prone to arterial spasms, there was an increase in the need to convert to femoral access.

“Our findings are consistent with other data that’s been gathered on lower-risk patients,” said Rao. “The results suggest that an initial strategy of wrist access is reasonable and may in fact be preferred in women, with the recognition that a portion of them will need to be converted to the traditional leg access.”

Among the other novelties of this trial, the successful use of the National Cardiovascular Research Infrastructure (NCRI) is perhaps most important from a clinical research operations perspective. The NCRI is a partnership between the DCRI and the American College of Cardiology (ACC) Foundation to develop a clinical investigator network based on the data-collection activities of the National Cardiovascular Data Registry CathPCI Registry. The goal is to improve trial efficiency by providing sites with resources for recruitment, education, data collection, data standards, and guideline development.

According to Britt Barham, the project leader for SAFE-PCI, this is the first prospective, randomized trial in the United States to use data integrated from a registry. He explained that this unique setup necessitated the addition of a registry site manager to each site team to maintain a communication link between the site and the study coordinator. It did, however, greatly cut down on the amount of redundant data entry during site enrollment and thereby reduced the workload at the trial site by 40 to 50 percent.

“One of our selling points that we used to garner enthusiasm among the registry site managers was that this was an opportunity to use what they do on a day-to-day basis to make a direct impact on the trial and see their data go to a use above and beyond how it is normally used in the registry,” said Barham.

Rao pointed out that a further advantage of using the NCRI in SAFE-PCI was that because the data imported from the registry expedited the enrollment process, the cost of site enrollment was significantly reduced; in an economic climate where clinical research is becoming increasingly expensive, this is potentially a significant achievement. In SAFE-PCI, coordinators were able to complete enrollment and close the database 20 days earlier than was projected in the budget, and this saved a significant amount of money on the back end.

However, using linked registry data does not automatically equal savings, cautioned Brian McCourt, (pictured left) DCRI director of clinical research informatics, as these first-of-their-kind projects require much higher startup costs than traditional clinical trials. McCourt explained that SAFE-PCI leveraged a significant amount of time for the informatics team, database programmers, and corresponding staff at the ACC to implement the NCRI infrastructure. Because there is a lower cost per patient after the system is established, trial coordinators have to evaluate all these factors when deciding whether to use registry data.

“There is a tradeoff there on how much your upfront investment is compared to the number of patients you want to follow long-term,” said McCourt. “That’s a pretty consistent thing we have to look at on any given project so we can best determine the most efficient solution to design around using electronic health records and registry data.”

Rao explained that the findings from SAFE-PCI are particularly significant because, until now, there have been little viable data on women with ischemic heart disease, and this study really underscores the fact that there are safer ways to perform cardiac catheterization. He remarked that when asked about their preference, most of the women favored the radial procedure to the femoral. The study results indicate that, initially, radial access should be the preferred option for clinicians, but patients should be made aware that sometimes wrist access is impossible, and in those cases, clinicians will have to convert to leg access.

All SAFE-PCI coordinators agree that this trial was a large-scale, successful proof of concept, and there are sure to be more trials that follow suit in linking clinical trial enrollment with registry data. Because the database meets the Food and Drug Administration’s (FDA’s) regulatory standards, it can even be used in future studies to evaluate a novel drug or device that is seeking FDA approval.

“We clearly learned that this is a viable method to do research, and it has enough cost savings and opportunities for efficiency to take what was really a demonstration project and work on how do we replicate it across many different types of projects,” said McCourt.