January 2, 2019 – One of the first DCRI studies of its kind could become a model for the future.

Heart failure patients have a tendency to accumulate excess fluid in the body, which can lead to debilitating symptoms such as shortness of breath and swelling. Loop diuretic medication, aims to prevent accumulation of this fluid and is the cornerstone treatment for heart failure signs and symptoms. With more than six million Americans affected by heart failure, and about one million hospitalized every year, a new DCRI study called TRANSFORM-HF will directly compare two well-known diuretics – furosemide and torsemide – to determine which is the most effective.

At the same time, the trial’s innovative design could change the way medical research is developed and managed for years to come. Investigators hope that TRANSFORM-HF, which began this summer, will live up to its name – that its innovative approach will transform the clinical trial experience for researchers, site staff, and patients. 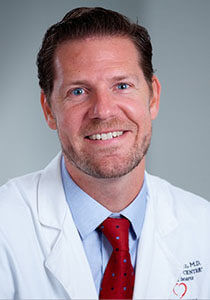 “This is one of the first contemporary heart failure studies to significantly streamline the trial process in many important ways,” said Robert Mentz, MD, (pictured) co-principal investigator on the study. “It’s designed to have a lighter touch than most heart failure trials and reduce the burden on everyone involved. We’re striving to surpass traditional rates of site activation and patient enrollment.”

TRANSFORM-HF is being led by the DCRI team and Eric Velazquez at Yale University as well as the National Heart, Lung, and Blood Institute, which recently awarded both institutions grants for the Clinical Coordinating Center (CCC) and Data Coordinating Center (DCC). The primary endpoint is all-cause mortality. Secondary endpoints include patient-reported quality of life and hospitalizations.

The trial was designed to improve the clinical research experience for site coordinators and patients at enrolling hospitals. The study has a projected enrollment of 6,000 patients at approximately 50 sites in the U.S. over the next three years. Enrollment criteria are very broad so that those with both low ejection fraction (weak hearts) and normal ejection fraction (stiff hearts) may enroll. Patients are randomized to either furosemide or torsemide as the study drug, but medication dose and frequency are determined by the patient’s usual medical team.

To date, no large, definitive clinical trial has determined which loop diuretic— furosemide or torsemide—is best, and neither American College of Cardiology nor American Heart Association HF guidelines provides a specific recommendation.

“With slow enrollment across many recent heart failure trials, we’ve been in a particularly challenging time for this kind of research,” Mentz said. “So a key aim was to make TRANSFORM-HF as streamlined as possible for site staff as well as patients, many of whom are elderly and might not otherwise enroll because of the burden of participating in a traditional trial.”

During TRANSFORM-HF, heart failure patients admitted to the hospital are enrolled and randomized equally between the two diuretics before discharge, and then continued on that diuretic as part of their daily care after they return home. While most trials require patients to come to the clinic for extra visits, patients in TRANSFORM-HF follow up per usual care with their normal care teams—there are no extra visits.

Instead, study follow-up is coordinated by the DCRI call center, with patients receiving a 15-minute phone call 30 days into the study and then every six months for up to 36 months, asking scripted questions about medication use, quality of life, and hospitalizations. This “televisit” process saves patients the time, effort, and expense of the extra clinic visits usually required from conventional studies. Hospital records and the National Death Index also will be used to gather follow-up information.

“We knew that if questions were to be answered, TRANSFORM-HF needed to be a really large study in addition to being simple, decentralized, and patient-centered,” said Kevin Anstrom, PhD, co-principal investigator at the trial’s DCC. “There was no way we could do this study with the traditional model.”

“We worked closely with sites on the trial design and the processes to enroll patients and collect patient data,” said Eric Eisenstein, DBA, another co-principal investigator at the DCC. “And because the trial is essentially embedded in the patient’s usual care with their healthcare providers, nothing changes for them –we’re not impacting how they’re otherwise treated. Fewer moving parts lowers trial costs and makes it much easier for everyone in the study.”

According to Eisenstein, investigators also wanted to focus on minimizing the amount of data collected throughout the trial, by, for example, limiting the detail of case report forms. They wanted to optimize the process without sacrificing data quality or the study’s scientific validity, he said.

Because investigators are not “dealing with an investigative product where we don’t know the side effects, this kind of comparative study lends itself well to a streamlined model,” said Mary Creed, MSN, associate director of DCRI’s clinical operations.

“That said, we still have the challenge of keeping the study foremost in patients’ minds and helping to prevent dropout, particularly without the in-person site visits. But simple strategies such as wallet cards in English and Spanish and refrigerator magnets should be helpful.”

TRANSFORM-HF is an exception to traditional HF trials where so few patients qualify, according to DCRI Fellow Stephen Greene, MD.

“Most heart failure trials have many exclusion and inclusion criteria, so only a small percentage of patients seen in general practice qualify,” he said. “TRANSFORM-HF is different – the vast majority of patients seen in everyday practice are going to be eligible. This will help the enrollment rate, and importantly, will also generate trial results that will apply to the at-large heart failure community.”

“Loop diuretics are such an incredibly common heart failure therapy that we really need to know if there is a best one to use,” said Greene. “We owe it to the scientific community, and to our patients, to know the best loop diuretic for heart failure patients.”