A new tool — a type of ultraviolet light called UVC — could aid hospitals in the ongoing battle to keep drug-resistant bacteria from lingering in patient rooms and causing new infections.

Some hospitals have already begun using UVC machines in addition to standard chemical disinfection to kill potentially dangerous bacteria such as methicillin-resistant Staphylococcus aureus (MRSA), but research on their effectiveness has been preliminary.

A large randomized trial led by Duke Health and published in The Lancet finds use of UVC machines can cut transmission of four major superbugs by a cumulative 30 percent. The finding is specific to patients who stay overnight in a room where someone with a known positive culture or infection of a drug-resistant organism had previously been treated.

“Some of these germs can live on the environment so long that even after a patient with the organism has left the room and it has been cleaned, the next patient in the room could potentially be exposed,” said Deverick J. Anderson, MD, an infectious disease specialist at Duke Health and lead investigator of the trial, which included more than 21,000 patients. “Infections from one of these bugs are tough and expensive to treat and can be truly debilitating for a patient. For hospitals, these infections also cause a burden of costs that often aren’t reimbursable.” 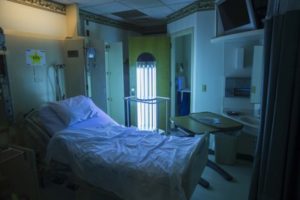 The trial was conducted from 2012 to 2014 at nine hospitals in the Southeast, including three Duke University Health System hospitals, a Veterans Affairs hospital, and small community health care settings.

The facilities used a portable machine called the Tru-D SmartUVC to disinfect rooms where patients with the target bacteria had been staying. For about 30 minutes, the machine emits UVC light into an empty room, the light bouncing and reflecting into hard-to-reach areas such as open drawers or between cabinets and fixtures. The light waves kill bacteria by disrupting their DNA.

Overall, the most effective strategy was using quaternary ammonium followed by UV light. This combination was particularly effective against transmission of MRSA.

The researchers found that using chlorine bleach instead of quaternary ammonium cut transmissions of VRE by more than half. Adding UV light to the bleach regimen was even more successful, cutting VRE transmission by 64 percent.

None of the cleaning methods significantly reduced the incidence of C. difficile, an infection that takes hold in the gut. The incidence of Acinetobacter was limited to one case, so researchers did not include it in their analyses.

UVC machines are now being manufactured by several companies and are priced upwards of $90,000. Hospitals could save money by reducing costly infections, but that may not be enough to offset the economic impacts of leaving patient rooms vacant for an additional 30 minutes for cleaning, Anderson said.

“There is such a push in the hospital environment to turn rooms over that really any amount of added time is viewed as a potential issue,” Anderson said. “In a large hospital, you might have 100 rooms that are vacated and turned over in one day.”

Hospitals have to be strategic to enable extra disinfection time while considering varied discharge times, the demand for patient rooms and availability of the machines, Anderson said. Even with these factors — which change daily — hospitals in the trial achieved 90 percent compliance, meaning they disinfected 90 percent of the targeted rooms following the exact trial protocol.

UVC light is just one of numerous methods hospitals can add to standard disinfection regimens to continue to cut infection rates for all pathogens, including drug-resistant organisms, Anderson said. Strategies such as stringent hand-washing, precautions for staff contact with infected patients and prudent use of antibiotics in patients also play a role, he said.

The Duke researchers are planning to look at other day-to-day strategies hospitals can use to manage infections, such as non-ultraviolet lights that are safe to use near people but also can halt the proliferation of germs.

The study was sponsored by the CDC Prevention Epicenters Program (U54CK000164), the National Institute of Allergy and Infectious Diseases (K23AI095357) and the National Center for Advancing Translational Sciences (UL1TR001111). Tru-D SmartUVC, Ecolab, Clorox and Angelica Corporation and Shared Linen Services donated materials used in the trial.